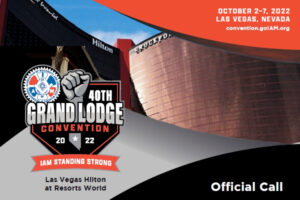 In compliance with the provisions of Article II, Section 1 of the Constitution, the Executive Council has selected the city of Las Vegas as the convention site, and a call is hereby reissued for the 40th Convention of the Grand Lodge of the International Association of Machinists and Aerospace Workers, to be held at the Las Vegas Hilton at Resorts World, Las Vegas, Nevada commencing on October 2, 2022. As you know, this is postponed from last year due to the worldwide pandemic. The safety and health of all the delegates is paramount. 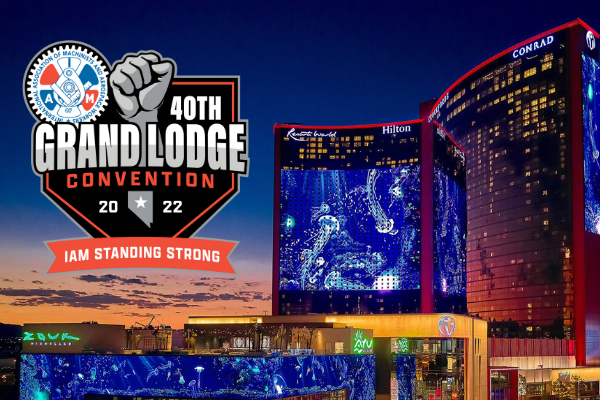 Therefore, we are asking each IAM Lodge, if they haven’t already, to consider purchasing an ad. You can design your own ad, or select one of the ready-made options from templates, which can be personalized by submitting print quality photos of your lodge members.

For an order form and detailed information on ad choices, pricing, specifications and sizes, please contact Communications Department Office Assistant Terri Crutchfield at 301-967-4520 or tcrutchfield@iamaw.org. You can also submit your ad online here.

Ads and payment must be received by the IAM Communications Department on or before Friday, May 6, 2022. 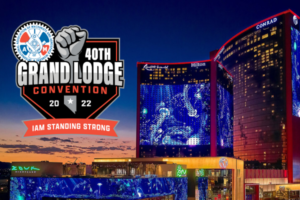 The IAM continues to prepare for its 40th Grand Lodge Convention, to be held October 2-7, 2022 at the Las Vegas Hilton at Resorts World.

As part of the preparations, the IAM Executive Council has voted on and come to consensus on a 40th IAM Grand Lodge Convention logo and theme, which will be “IAM Standing Strong.”

“Our union has overcome so many great obstacles in the past few years,” said IAM International President Robert Martinez Jr. “Despite all the challenges we have faced, we have remained strong and united toward our goals of justice and dignity for every IAM member and family. We look forward to showcasing these great victories at our 40th Grand Lodge Convention under the theme of ‘IAM Standing Strong.’”

The 40th IAM Grand Lodge Convention Official Call will be mailed to Local Lodges in the coming weeks.

The IAM Executive Council has met and unanimously voted to hold the 2022 IAM Grand Lodge Convention at the Las Vegas Hilton Resorts World from October 2-7, 2022. A letter will be sent to Local Lodges soon with further information on delegates and constitutional proposals.

The Grand Lodge Convention had previously been scheduled to take place in San Diego in September 2021. The convention was postponed to protect the safety and health of convention delegates and guests during the COVID-19 pandemic.

Despite the IAM’s efforts, the previous venue in San Diego was unable to adequately accommodate the IAM Grand Lodge Convention in 2022.

“Myself and the entire IAM Executive Council are excited for the 2022 Grand Lodge Convention in Las Vegas,” said IAM International President Robert Martinez Jr. “I know that the Western Territory and the Host Committee will do a tremendous job transitioning to Las Vegas, a proud union city with a strong IAM footprint.”

“While we are saddened that it proved impossible for the IAM to hold a successful convention in San Diego, the Western Territory is looking forward to a great convention in Las Vegas,” said IAM Western Territory General Vice President Gary R. Allen. “This decision gives IAM members the best opportunity to participate in a productive and meaningful Grand Lodge Convention. Our Host Committee is ready and excited to get to work on behalf of IAM delegates from across North America.” 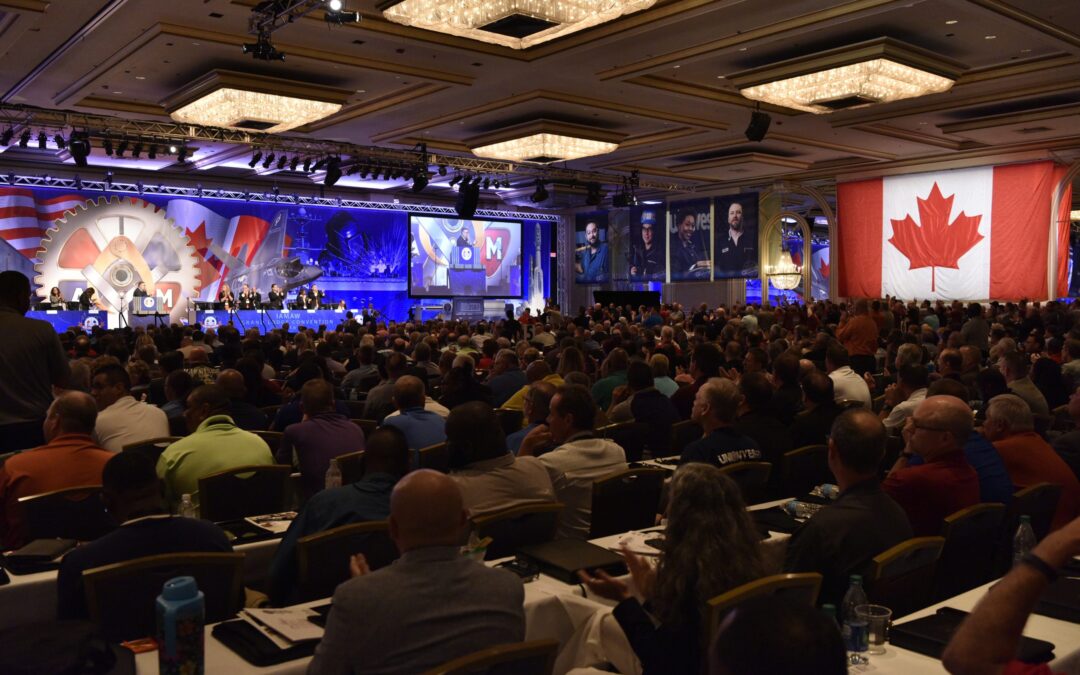 The IAM Executive Council has voted unanimously to postpone the 40th IAM Grand Lodge Convention, previously scheduled for September 12-17, 2021 in San Diego. The IAM will immediately begin planning for a 2022 Convention and communicate details as soon as possible.

A letter will be sent to Local Lodges soon with further information on delegates and constitutional proposals.

The decision to postpone the Convention was made to protect the safety and health of Convention delegates and guests. Further reasons include:

“Even as we start to return to some level of normalcy, this worldwide pandemic is unprecedented in our lifetimes,” said IAM International President Robert Martinez Jr. “I am incredibly grateful to the Western Territory Host Committee for all they have done and continue to do to plan for a successful Grand Lodge Convention. While this decision was not made lightly, the safety and health of all the delegates and guests must be first and foremost. We will continue to work toward rescheduling the Convention in 2022.”